Join Us in Celebrating Father’s Day 2021

FDNY FireFlag/EMS to be Honored at Pride Month Celebration

Exam #7001 Candidates: Time to Get Registered for Your Fitness Sessions

Deputy Assistant Chief Michael Fields has helped to pave the way for his son Michael Jr. to join the FDNY.

Happy Father’s Day! It’s that time of year again where we join those near and far to say thank you to all of the hard working, brave and selfless fathers in the FDNY. In celebration of this special day, you also get to meet EMS Deputy Assistant Chief Michael Fields and his son EMT Michael Fields Jr., as well as Firefighter dad Alfred Francis and his son Firefighter Amir Francis.

For Station 14 EMT Michael Fields Jr., joining the FDNY may have been inevitable as he grew up watching his parents, City South Deputy Assistant Chief Michael Fields and EMS Lieutenant Nikola Combs-Fields, serve the city his entire life.

“Growing up, I watched my parents serve New Yorkers each day and it impacted my life. My father is one of the hardest working people I know. He has always been a wonderful father and grandfather. He balances family and work life so well and makes it look easy, and he always supports and provides leadership in our family,” said Fields Jr.

“Ever since Michael Jr. was young, I wanted him to make his own choices in life regarding a career, as long as it made him happy and independent. I’m proud he has started his career in emergency medicine. He graduated from the Academy during the COVID-19 pandemic and he started working in the streets in an unprecedented time as a new EMT and I’m very proud of him. I hope he makes a name for himself in whatever path he chooses here. There are so many opportunities available here, I’m sure he will flourish,” the Chief added. “This career is like no other, because you’re helping people and giving back to the community and I really enjoy working for this Department. I’ve been here for twenty-six years and I hope to leave my mark. I’ve made it through the ranks and when I retire, I hope to leave this job better than when I came in.”

And like many people across our city, the Chief looks forward each year to celebrating the national holiday that’s dedicated to honoring fathers.

“Out of all the holidays, Father’s Day is my favorite one. My family normally throws a BBQ, and I send my kids my gift list,” the father of four said jokingly. “It’s the one day out of the year where all fathers are celebrated, and my family goes above and beyond to really show me love.”

Rescue 4 Firefighter Alfred Francis has a lot to smile about these days since he’s a first-generation Firefighter who created a legacy in his family. His son Amir, who’s also a United States Marine Corps veteran, recently followed in his footsteps by joining our fire ranks.

Firefighter Alfred Francis has helped to pave the way for his son Amir to join the FDNY. Amir, who works at Ladder 43 in Harlem, is also a United States Marine Corps veteran.

“I’m so proud to see my son become a second-generation Firefighter in our family and I’m happy he’s picked a career like this one. There’s no greater reward than saving someone’s life,” the father of three and 23-year FDNY veteran said. “When he was waiting for his list number to be reached, he was still overseas serving our country in the Marine Corps. I prayed for his safe return and hoped that everything would work out for him and it has. One of the proudest moments in my life was seeing him graduate from the Academy and I know he has adopted a second family by joining this Department.”

“I grew up watching my Dad help the city and was always around the members of his firehouse, and I always knew this was something I wanted to do,” added Amir who works at Ladder 43 in Harlem. “My father can do anything. He is the jack-of-all-trades. Roofing, tiling, electrical work, you name it, he can do it. He has always been a diligent hard worker and it feels good to follow in his footsteps. He has always been a great father, husband, and Firefighter. He loves the job and I know the people on the job love him back and I love him too.”

Want to join the FDNY and make a difference in the community just like the brave members you read about today? Take the first step by learning more about our rewarding careers at joinfdny.com/careers. 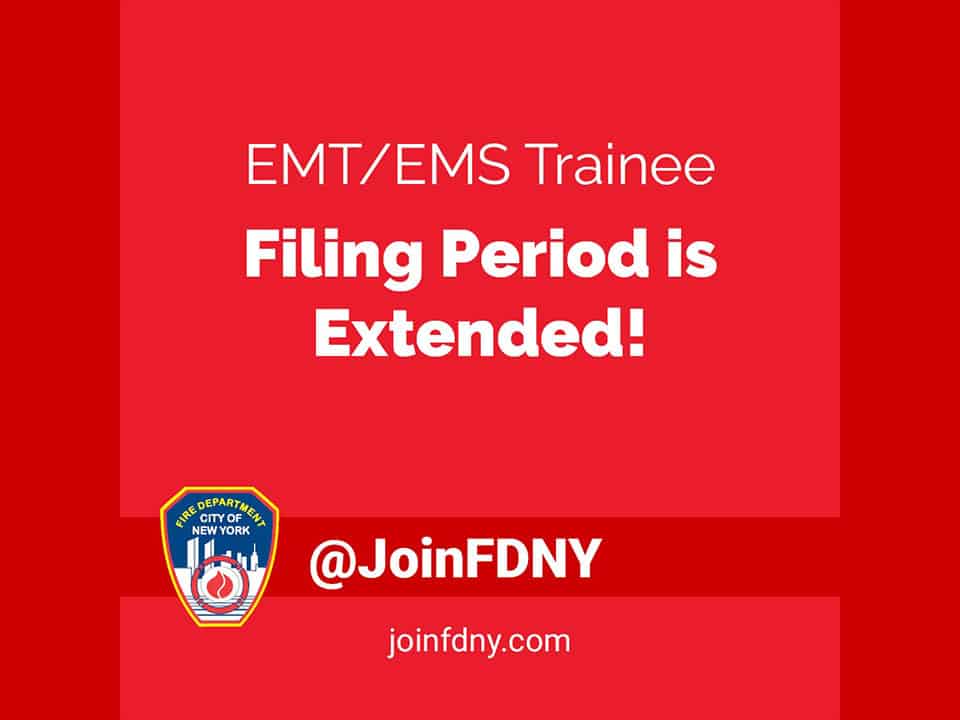 The deadline to apply for this latest filing period is Nov. 23.

Apply Today to Become an EMT or EMS Trainee