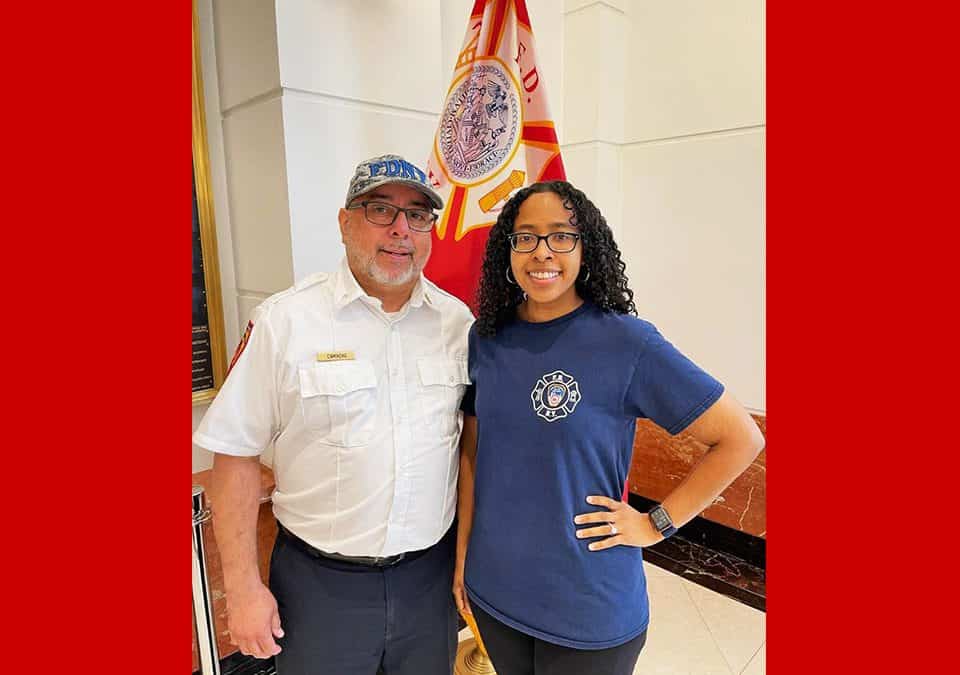 Our Father’s Day celebration is back for another year and we’re coming with even more FDNY family love for 2022. Join us below in meeting FDNY dads Chief Inspector Sandy Camacho, retired Supervising Fire Marshal Donald Hayes, Firefighter Ulises Pena, EMT Anthony Gadison and EMT Lido Aviles, as well as their FDNY kids.

“I always thought that this was my way of giving back. I always strive to be courteous, informative and treat others the way I would like to be treated, all while doing my job,” said the Chief.

Born in Manhattan and raised in The Bronx, Chief Camacho has dedicated 36 years to the Bureau of Fire Prevention.

“I saw an advertisement saying that the Department was looking for chemical engineers. I applied, went in for an interview, and got the job. I always felt like this was my calling,” he recalled. “From the standpoint of a New Yorker, this job has provided me with the opportunity to help keep fellow New Yorkers safe. I live here, so on top of keeping me and my family safe, I also want my neighbors to be safe at all times, whether they are in a business or a residential establishment.”

Keeping it in the family, Chief Camacho’s daughter, Christine, followed in his footsteps by joining the Department. She works as a Violation Cure Specialist in our Legal Department. Christine is also a Bronx native and has been working with our Department for three years.

“My father was always looking for a way to get me into the Department by keeping me updated with job postings and things like that. I’ve been around the FDNY throughout my childhood because of my father, so I feel very comfortable here. Even though we work in different bureaus, I love the fact that I can always go to him for advice,” she said. “We work very closely with the Bureau of Fire Prevention here, receiving the documents needed to satisfy violations given by them to keep certain establishments up to code. Knowing how well we work together and get things done, it’s very fulfilling from an administrative standpoint that we are doing all that we can to help keep the people of this city safe.”

“It feels good having my daughter work here,” added Chief Camacho, who is Puerto Rican. “We occasionally drive to and from work together and it is very comforting to know that she is here.”

Every Father’s Day, the Camachos celebrate with a nice family dinner and spending quality time together. 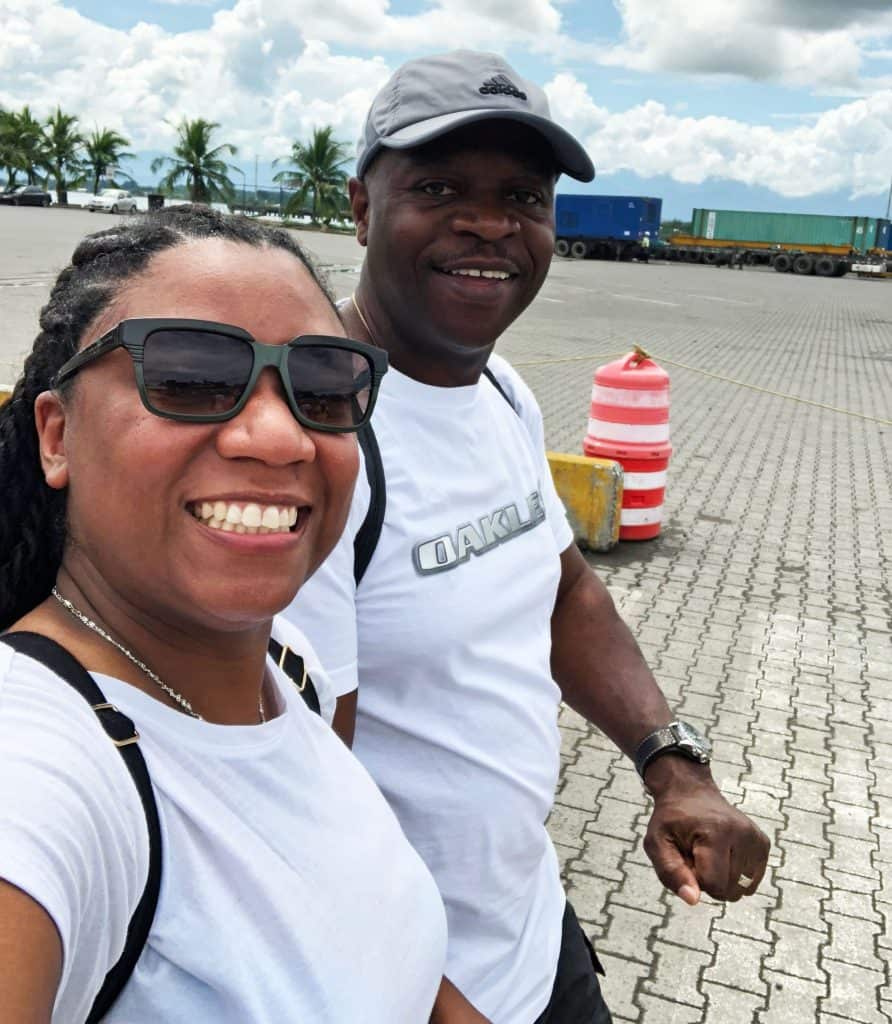 Thanks to her father retired Supervising Fire Marshal Donald Hayes, Captain Krystal Hayes became inspired to join the FDNY when she was a kid.

“I love the fact that no day is the same. Every day is something different, and you don’t need that pat on the back or the recognition. The fact that you were able to help someone in their time of need, that is the gratification of this job,” said the Captain. Hayes is a 15-year veteran of the Department, starting as an EMS Trainee in 2007, becoming a Lieutenant in 2015 and working as an EMS Peer Support Coordinator in 2020. She advanced to her current rank this past March.

And she learned the importance of public service from her father, retired Supervising Fire Marshal Donald Hayes, who served in our Department for 31 years.

“My dad loves the fact that I work for the Department. Every day he tells me how proud he is,” said Hayes.

“She’s right. I am extremely proud of my daughter,” Donald added. “She took an immediate interest in the Department as a kid and was around the firehouse with me as a child and I’m glad she’s working in the Department.”

Aside from a career family tradition and being a successful Black American family, the two have a Father’s Day tradition of their own and it will continue today.

“Every year, we go to a Father’s Day Luncheon at Belmont Park, where we can celebrate my dad and enjoy watching the horse races,” said Hayes. 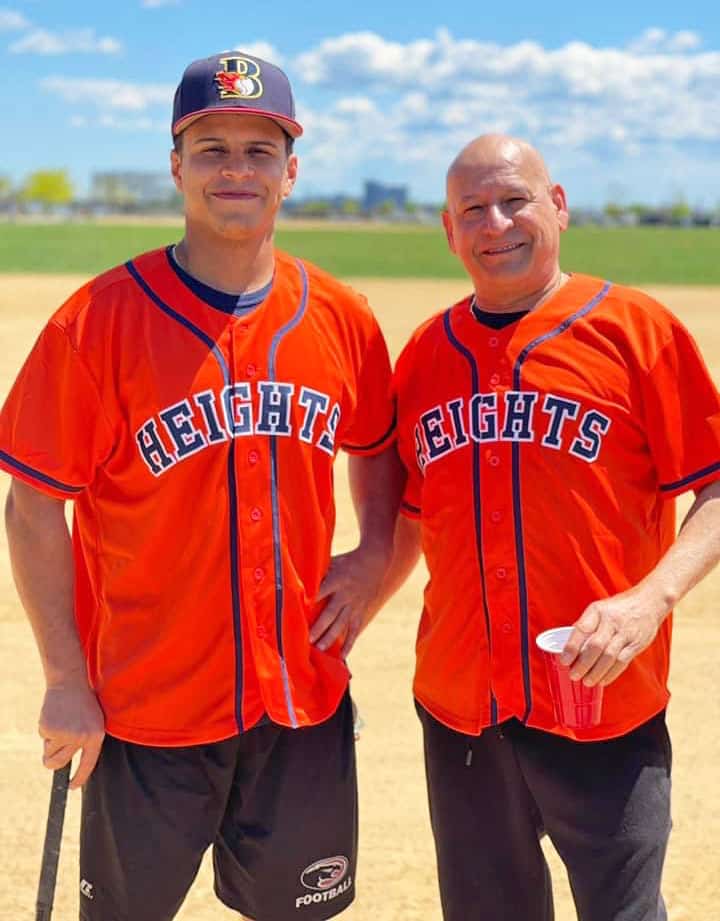 Firefighter Ulises Pena said he is proud that his son EMT Justin Pena decided to become a first responder like him.

Station 20 EMT Justin Pena has only been an EMT for the FDNY for four years, but has seen what the job has to offer since he was born thanks to his father, Engine 93 Firefighter Ulises Pena.

“When you work for this city, every day is a new experience. Between the people that you will meet and having New York City as your office, you have all the resources needed in order to master all aspects that this job has to offer,” said Justin, a Bronx native, who is also a member of the FDNY Baseball Team and FDNY Barbell Club.

“I was a lifeguard and a co-worker of mine was a Firefighter as well and basically recruited me to apply,” said Ulises. “I applied once I was qualified and I continued to work as a physical education teacher until my list number was called.”

The Pena duo are Dominican and Ulises said he is proud to help New Yorkers each day in Washington Heights.

“I have a strong sense of pride seeing more Latinos on this job and helping other Latinos in the neighborhood that my firehouse is in. I feel like I’m at home whenever I’m at work,” he added.

Becoming a part of this Department, and making a lineage of their own within the FDNY, Justin and Ulises both understand how special it is to have your family in the same line of work.

“It feels good to follow in my dad’s footsteps. It’s something I always wanted to do. He set the standard for me and I want to honor that while also making a path for myself,” Justin explained.

“I’m proud of my son for joining the Department. Growing up, I brought him to many events and had him around the firehouse as much as I could. I encouraged him to become an EMT while he was in college and since then, he has shown a strong will and consistent dedication to this line of work,” Ulises noted.

“I don’t know yet what we have planned for Father’s Day this year. Most of the time I just roll with the punches,” he added jokingly. “Quality time means the most to me, so no matter what is planned, as long as I’m with my family, I am happy.” 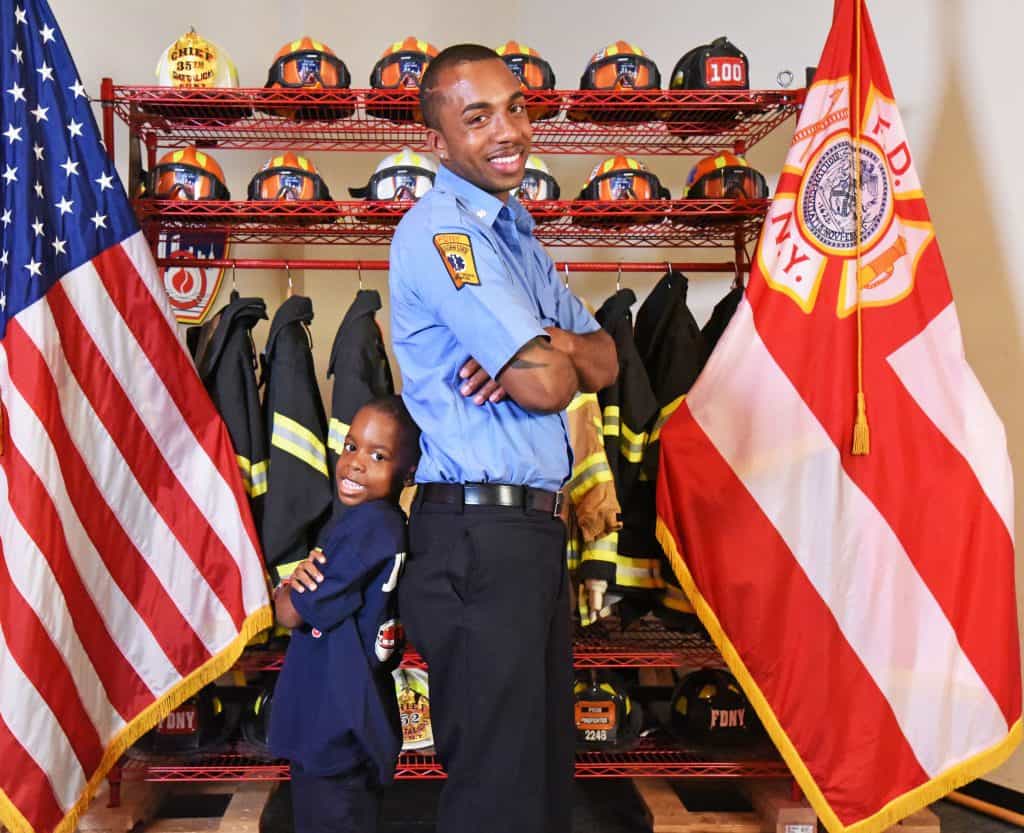 “I live to help people in pursuing their dreams. If you want to become an EMT and work for the FDNY, I want to help you stay on that track to get there,” said Gadison.

Gadison is from Bedford-Stuyvesant and works as a Program Manager and Drill Instructor for FDNY Youth. He also represents one of the many alumni members from the program who have joined the FDNY to help New Yorkers.

“I graduated from the FDNY High School in 2012, went through the youth program that I now work in, which led me into becoming a certified EMT,” Gadison explained. “My current position is why I love working here so much. I am able to give back to the students and help them along their process of becoming an EMT and hopefully more within the Department in the future. It’s only right that I give back to the program that I was a part of and teach the kids everything that was taught to me. It’s truly a full circle moment for me every day.”

Even though he’s only 5, his son Anthony Gadison Jr. already has dreams of following in his dad’s footsteps and working for the FDNY in the future.

“My son is what keeps me going. We like to treat Father’s Day like any other day that we are together by spending quality time and enjoying the day as a family,” said Gadison, who is Black American, Dominican and Haitian. “Joining this Department is the best decision I’ve made. The knowledge provided in the programs and in the Academy is worth it. Always expect the unexpected, keep a positive attitude and always continue to pay it forward for the next person.” 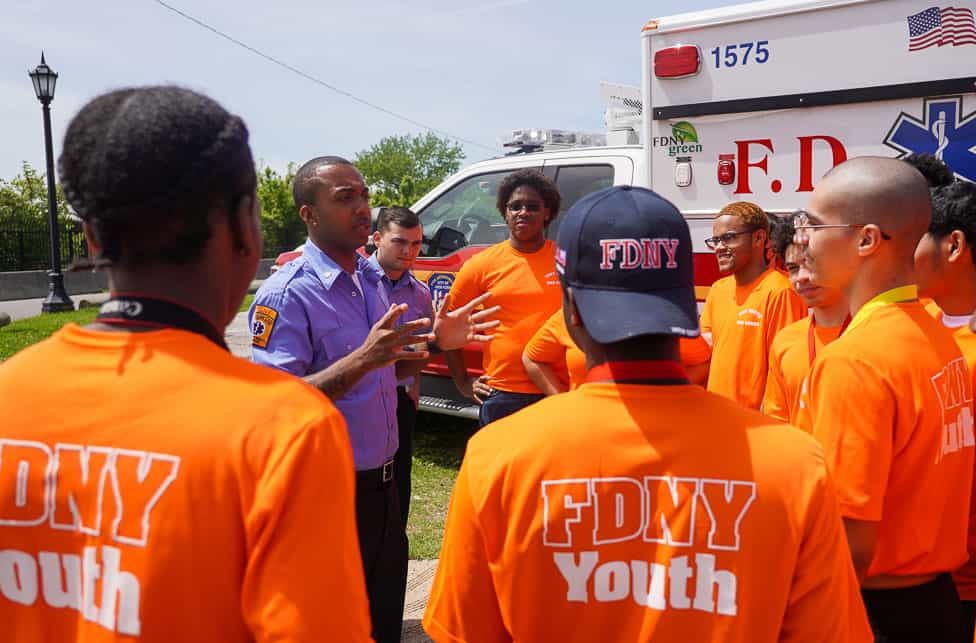 Gadison, who is an alumnus of the FDNY Captain Vernon A. Richard High School for Fire and Life Safety, is a Program Manager and Drill Instructor for FDNY Youth.

“Helping individuals was a draw to me at a very young age. Providing emergency care was something I never planned on early on in my life, but having the ability to work out on the road and be part of this city is something I always take pride in,” said Lido.

Born and raised in The Bronx, Lido has dedicated 20 years of service to the FDNY and is currently the Lead Haz-Tac Instructor at the Fire Academy for EMTs.

“Being an instructor now, I have the pleasure of seeing our newest EMTs before they graduate and I try to instill the same sense of pride I have into them. When you take pride in your station, your equipment, the neighborhood you work in, it makes a big difference in the attitude that you bring to work every day,” added Lido, who is Puerto Rican and Dominican. 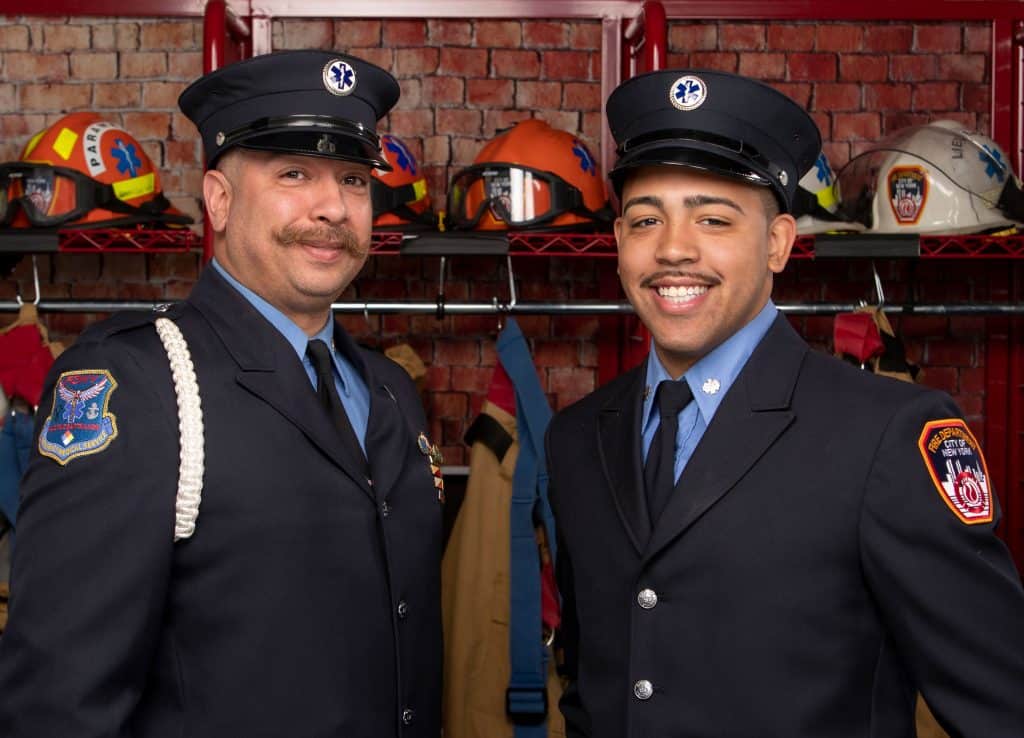 EMT Lido Aviles is proud to have his son Probationary EMT Lido Lee Aviles working in EMS with him.

And the Aviles family tree doesn’t stop there. Lido’s son, Lido Lee, is a Probationary EMT from Station 18 in The Bronx. Lido Lee, a Bronx native, is currently finishing his first year in the Department. He noted that he has always had an interest in joining the FDNY since he was a child.

“Growing up, I was always obsessed with fire trucks and as I got older, hearing my dad tell stories of being on the job and how much he loved it really influenced me to join the Department,” Lido Lee recalled.

“Having my son follow in my footsteps by joining the Department is very exciting for me,” Lido added. “I joined at 25 and so did he. He works in the same division that I did and he is almost like a spitting image of me.”

Like many families, The Aviles duo will be celebrating Father’s Day with a family barbecue, music, great food and making memories.

We hope that these stories have inspired you to join the FDNY family. You can learn more about all of our careers today here. 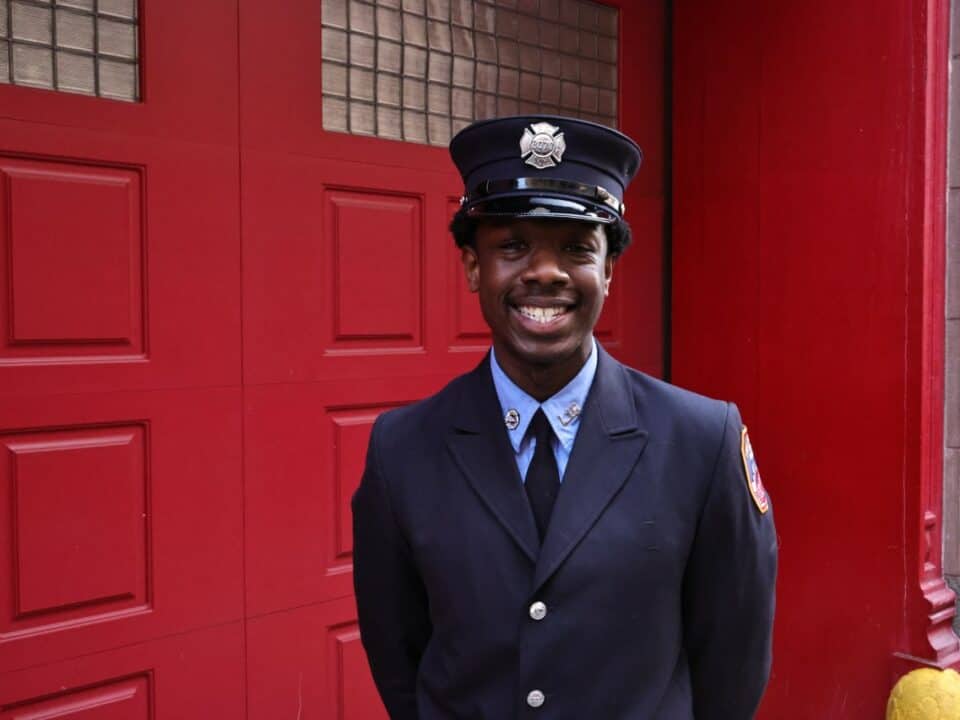 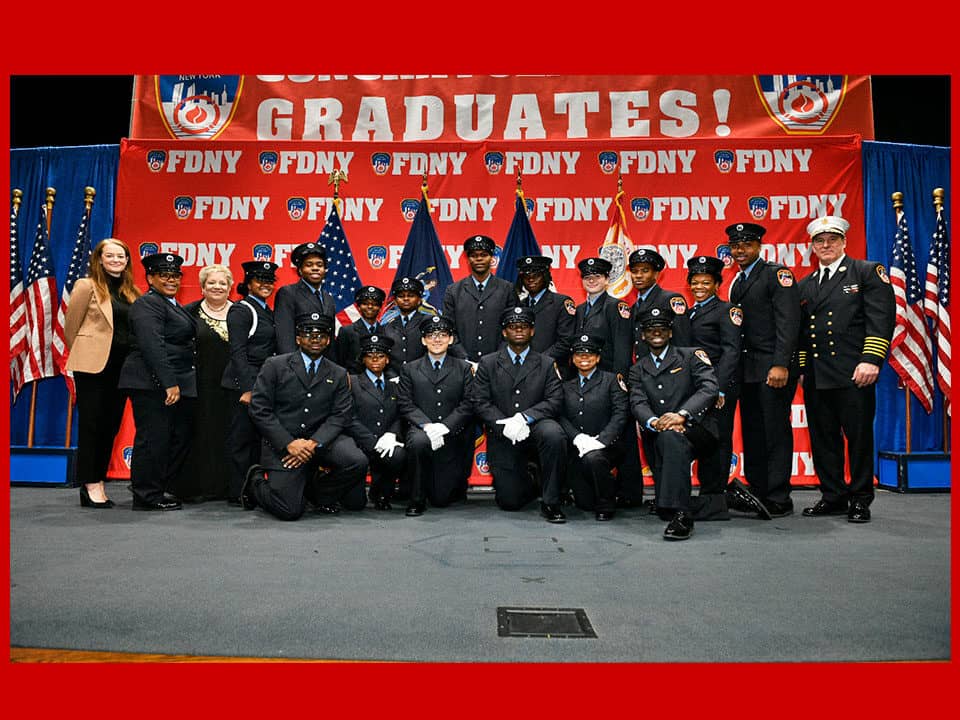