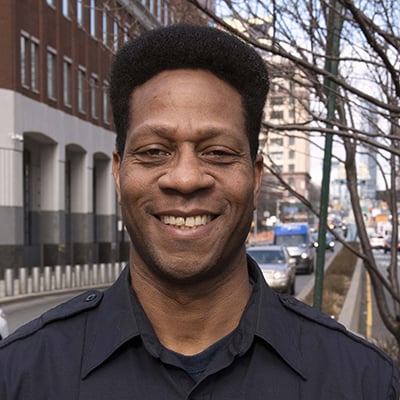 Firefighter Marc Anderson joined FDNY at his father’s and mentor’s recommendations and is currently stationed at Ladder 105 in Brooklyn. He is proud to be a Firefighter in Brooklyn, the borough that he is from, and enjoys engaging with the community. He greets community members in front of the firehouse in the mornings and acknowledges that they appreciate when firefighters communicate frequently and effectively with them. He says, “it never ceases to amaze me how if someone calls for our help, they seem a little taken aback because they may expect only a couple of responders to show up, but we all show up. When we respond, we respond together.”

He understands the importance of listening. Like the senior Firefighters he looks up to, he enjoys continuing to learn new tools and procedures on the job. He says, “There has not been a day when I did not want to go to work. There is so much to learn and so much to do.” Firefighter Anderson loves the sense of comradery and is “grateful for the opportunity to build differences on this job.”